Planting Of the Trees

This is continuation from the last post The Beginning.

When I called the previous owner to talk to him about paying half for the replanting, he told me what happened to the trees. He said he only owned the land for 2 years and the trees were not there when he bought it. The owner before him did to him what he did to me, he did not disclose to him the trees where not there. He found out from that owner, the trees did not survive the first year because the very first winter after the trees were planted the many deer in the area dined on them through out the winter and had eaten most of the tops off (deer are browse eaters, they love young tender twigs and buds from young trees). Then after the onslught of the deer what trees survived was finished off by a flood that spring. The flood did damage two ways, one buy knocking the trees over and piling debris on them and by washing out the pre-emergent herbicide that was put down to keep the weeds at bay. So what the deer and flood didn’t kill the weeds did by robbing the little trees of nutrients, water, and sun light. He told me the bottom ground were the trees are planted floods about once a year. He thought it was a waste of money to replant so didn’t bother and didn’t tell the FSA what happened. So both previous owners were collecting money from the FSA for taking care of tress that were not there. He said if I had not called the County Forester they would have never checked and I too could have just kept collecting the money. I told him my conscious wouldn’t let me do that.

Lesson # 2: Don’t try and save money by not hiring a good real estate Attorney when you buy your farm. Get one who knows about these contracts.

This was more bad news for me, I find out most of my farm ground floods once a year and on top of that I had already signed the contract with the FSA (Farm Service Agency) that I would continue the contract of taking care of the trees. Once I had done that the previous owner was relived of the responsibility. What this meant… if I didn’t replant, I would have to pay back all the money to the FSA that they had paid out to the previous owners for the cost of the planting and the payments for taking care of the trees. It was going to be about 9,000.00. I was floored, needles to say I had buyers remorse. The only option I could afford was to replant and hope for the best and come up with a solution to help protect the trees.

I searched the internet and found my solution. Tree Shelters or some times called tree tubes.

I bought 5ft tubes that go over the little trees  and protects it against deer and rabbits and other critters from munching on them. They also protect against  mice an voles from girdling your small trees, this is where they eat the bark off your seedling all away around the base during the winter months when food is scarce. The tubes also act like little green houses to help make your trees grow twice as fast. It traps condensation that collects on the inside of the tube that trickles down to the base of the tree and helps keep it watered even during dry spells. 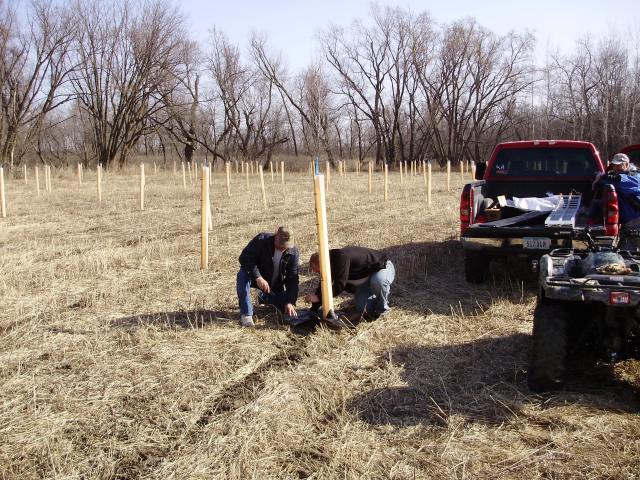 I have found the tree tubes are the answer to my problem and they have now have stood the test of time of protecting my trees. A good source for tree tubes is the Tree Pro, they are very knowledgeable and can help with any questions you may have. call Jeff at   1-800-875-8071

I am a retired conductor for a commuter railroad in Chicago IL, I now live in and have bought a 40 acre farm in South Central Iowa that I have built from the ground up. My wife and I are trying to raise and grow most of my own food using sustainible and organic methods. I have a blog that journals my journey to becoming a farmer.
View all posts by Gordon Milligan →
This entry was posted in Tree tubes. Bookmark the permalink.

6 Responses to Planting Of the Trees

Examining Life through the persepctive of God and men

A Year In Redwood

A diary of life in rural Redwood, Co. Tipperary as told by a city girl

Enjoying Life a Day at a TIme

This Blog Is Not Recommended By WordPress

Issues of politics, race, and everything else.

Living the way we do

Farming, being a mum, running a business ...

Can a creative, hard-working family make a living working with nature? Join us on the journey from idea to practice as we revive an Iowa farmstead

The Purl Side
Ramblings From Jewels