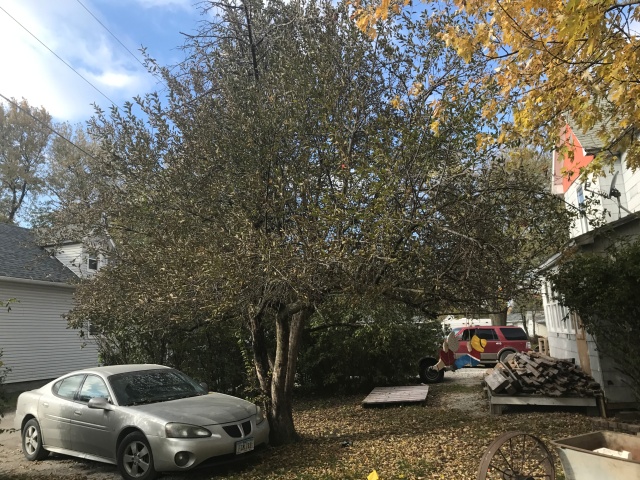 After many hours of thought we have decided to take the direction of the farm to be an heirloom apple orchard. We like to just take off for parts unknown on a moments notice so having animials was not going to work for us anyway. I have always had a passion for trees and heirloom apple trees are my newest passion. Last March my wife and I took a course on how to graft apple trees at the Seed Savers Exchange in Decorah Iowa and ever since I have become addicted.

Me standing in front of a wild seedling apple tree by Newton Iowa that I am about to collect scion wood from. Someone told me about this tree that’s growing in a ditch along a gravel road. They said it had some very good tasting apples. Most apple trees that grow from seed is a new variety, and if this apple turns out to be as good as advertised then I will name it Niki Sweet after my wife.

Finding out about my brother’s Hawkeye apple tree has pushed me in that direction and now I am on the lookout for other old trees where I can take cuttings from while the tree is dormant and graft them on to other apple rootstock this coming spring. That way I am sure to get the exactly the same tasting apple. If you grow a tree from seed you won’t get the exact same tasting apple. The seeds are like offspring of the tree and are the result of the tree that produced the apple and the tree that pollinated the flowers in the spring.

This is an old unknown variety at an old farm by Liberty Center Iowa that I have taken cuttings from.

The varieties I now have are Hawkeye, Niki Sweet, Grimes Golden, Duchess of Oldenberg, Wolf River, Cox’s Orange Pippin, Liberty, Pristine, Arkansas Black, Honey Crisp, Empire, Candy Crunch, and several unknown varieties. I am always on the lookout for new varieties, so if you know of any very old or wild apple trees please let me know.

Some of the scion wood I have collected this winter.

At this time, collecting apple trees is just a hobby and not sure if I will start selling trees or have a pick your own orchard in the future.

I am a retired conductor for a commuter railroad in Chicago IL, I now live in and have bought a 40 acre farm in South Central Iowa that I have built from the ground up. My wife and I are trying to raise and grow most of my own food using sustainible and organic methods. I have a blog that journals my journey to becoming a farmer.
View all posts by Gordon Milligan →
This entry was posted in Fruit orchard. Bookmark the permalink.

Examining Life through the persepctive of God and men

A Year In Redwood

A diary of life in rural Redwood, Co. Tipperary as told by a city girl

Enjoying Life a Day at a TIme

This Blog Is Not Recommended By WordPress

Issues of politics, race, and everything else.

Living the way we do

Farming, being a mum, running a business ...

Can a creative, hard-working family make a living working with nature? Join us on the journey from idea to practice as we revive an Iowa farmstead

The Purl Side
Ramblings From Jewels